Brainstorm has been TD Ameritrade’s trusted virtual set solution over the past three years. So naturally, the Brainstorm Suite was chosen to design, build, and broadcast the virtual environment. BMG used one Infinity Set renderer together with a traditional control room to cut the show. Studio camera feeds were PTZ cameras, and the remote feeds were brought in utilizing LiveU.

Brainstorm and Mena International, a Sports Services Provider and system integrator from Egypt and Kuwait, were involved in the live broadcast of the Opening Act of the Rafa Nadal Academy in Kuwait, providing augmented reality content and graphics.

Brainstorm is currently hosting a Virtual Week online with great success. With webinars focused on its products and solutions, as well as several daily virtual production demonstrations streamed live on the company’s YouTube channel three times a day, Brainstorm is virtually closing the social distancing gap that the current coronavirus global crisis has caused between many companies and their potential customers and audiences.

Brainstorm has been crucial in providing a cutting-edge virtual production system for Florida-based MIG, a company that, since 1979, has been working at the innovative intersection of creativity and technology to strategically design and create vivid experiences that inspire very specific actions in their client’s target audience. 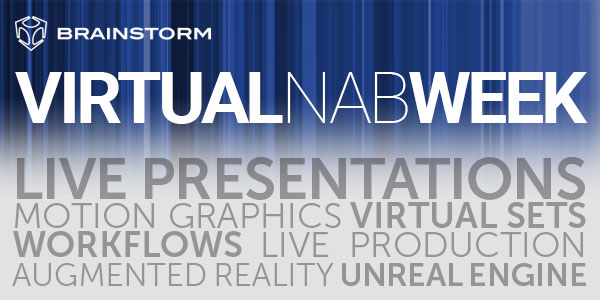 The Brainstorm Virtual Week will showcase a number of public and private sessions starting Monday, April 20th, through to Friday, April 24th, with dozens of online webinars in different time zones. The webinars will be focused on InfinitySet’s photorealistic virtual sets and augmented reality including Unreal Engine, broadcast virtual set workflows using InfinitySet as a hub for a number of technologies, and Aston as the most versatile 2D/3D motion graphics creation, CG and playout system, with special interest in graphics workflow environments.

For any media request regarding our products or high resolution pictures, please contact press@brainstorm3d.com

We use cookies to ensure that we give you the best experience on our website. If you continue to use this site we will assume that you are happy with it.OKRead more