Brainstorm has successfuly coordinated the European Project AdMiRe «Advanced Mixed Realities» funded by the European Commission under the Horizon 2020 Programme.

«The project focuses on the development and validation of Mixed Reality solutions to improve the interest and participation of the television audience as well as the generation of more attractive content», says Francisco Ibáñez, R&D Project Manager at Brainstorm and Coordinator of AdMiRe. The project has been successfully completed and AdMiRe has been properly validated by the three participating broadcasters: NRK (Norway), TVR (Romania) and Premier Media (Ireland).

With a simple App installed on a cell phone, tablet or laptop, jointly developed by UPF University (Spain) and Brainstorm, the audience is captured perfectly. Their stream is sent to AdMiRe’s servers where the silhouette of the captured person is extracted. The AdMiRe project integrates, among others, the NVIDIA Maxine silhouette extraction algorithms to be able to capture the audience on any background (without the need to use green screen). The integration of the audience, guests, collaborators or presenters is done with the Brainstorm InfinitySet graphic solution, which requires the use of NVDIA graphics cards for its correct keying, and the background extraction and super resolution modules developed by EPFL University (Switzerland). The captured person can remotely participate in the TV shows as if they were physically there. 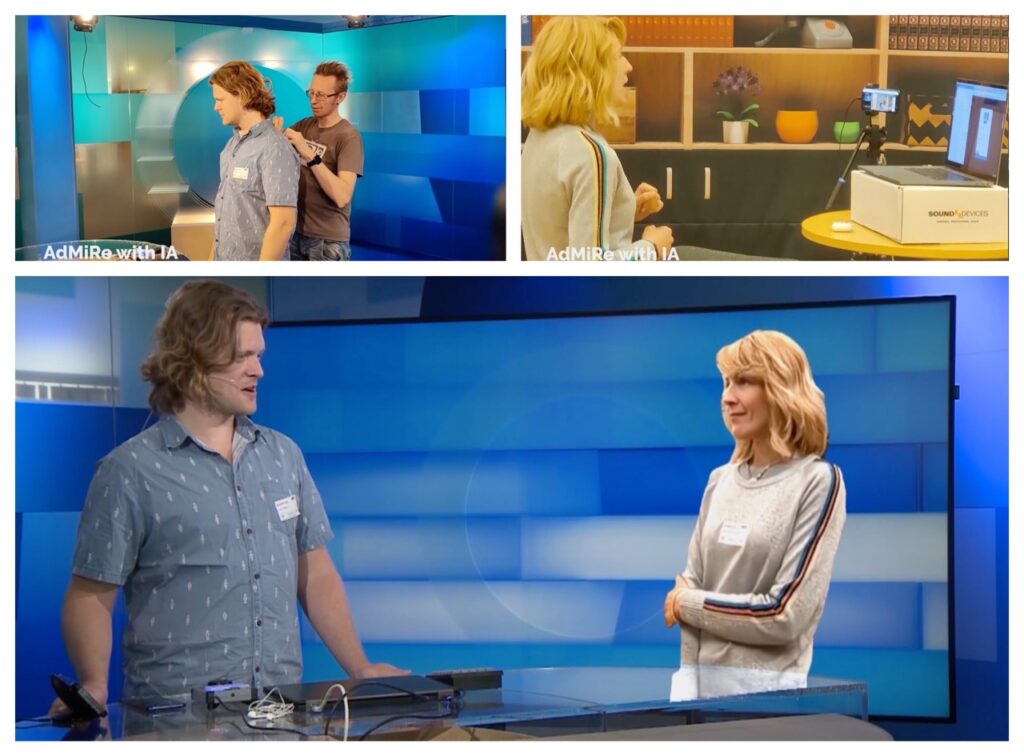 Javier Montesa, Technical Coordinator of the Project, explains that “AdMiRe incorporates highly innovative video capture, processing and transmission technologies, as well as super-resolution and background subtraction technologies in order to bring the viewers to the television sets in the most realistic and simple way possible, through the use of mobile devices”. Unlike the current technique that allows remote participation in television programs through a simple video, AdMiRe has achieved that the viewers can be perfectly integrated into the scene as if they were physically on the set, generating an excellent visual perception for the audience. AdMiRe also allows broadcasters to save costs by bringing collaborators and guests to TV sets and supports the European Commission’s «green deal» policies.

Francisco adds that “with the AdMiRe project, Brainstorm has taken the first step towards the future remote production of television programs by integrating presenters, guests and collaborators from different parts of the planet into the same program, interacting and participating as if they were all physically together and being practically imperceptible to the audience”.

Brainstorm has also integrated and validated AdMiRe with Disguise (UK) for XR (Extended Reality) studio technology based on LED screen. The whole validation process has been designed and developed by NTNU.

The progress of the project and the results obtained can be followed on www.admire3d.eu as well as on the project’s social networks.

For any media request regarding our products or high resolution pictures, please contact press@brainstorm3d.com

You can learn more about what cookies we use or disable them in the settings.

This website uses cookies so that we can offer you the best possible user experience. Cookie information is stored in your browser and performs functions such as recognizing you when you return to our website or helping our team understand which sections of the website you find most interesting and useful.

If you disable this cookie we will not be able to save your preferences. This means that every time you visit this website you will have to activate or deactivate cookies again.

This website uses Google Analytics to collect anonymous information such as the number of visitors to the site, or the most popular pages.

Please enable strictly necessary cookies first so we can save your preferences!